On Wednesday, the Bank of Japan (BoJ) announced they would continue to implement their “yield curve control” (YCC) policy. Economists and investors didn’t necessarily expect this to happen after monetary easing back in December, when the BoJ lifted its 10-year government bond yield range from +/-0.25% to +/-0.50%. This raised the idea that they may abandon YCC, since inflation has now reached 4.0% year on year in Japan. However, the central bank promised to retain their long-standing policy. The Japanese yen slumped on the news and the market rallied due to its cheapness: 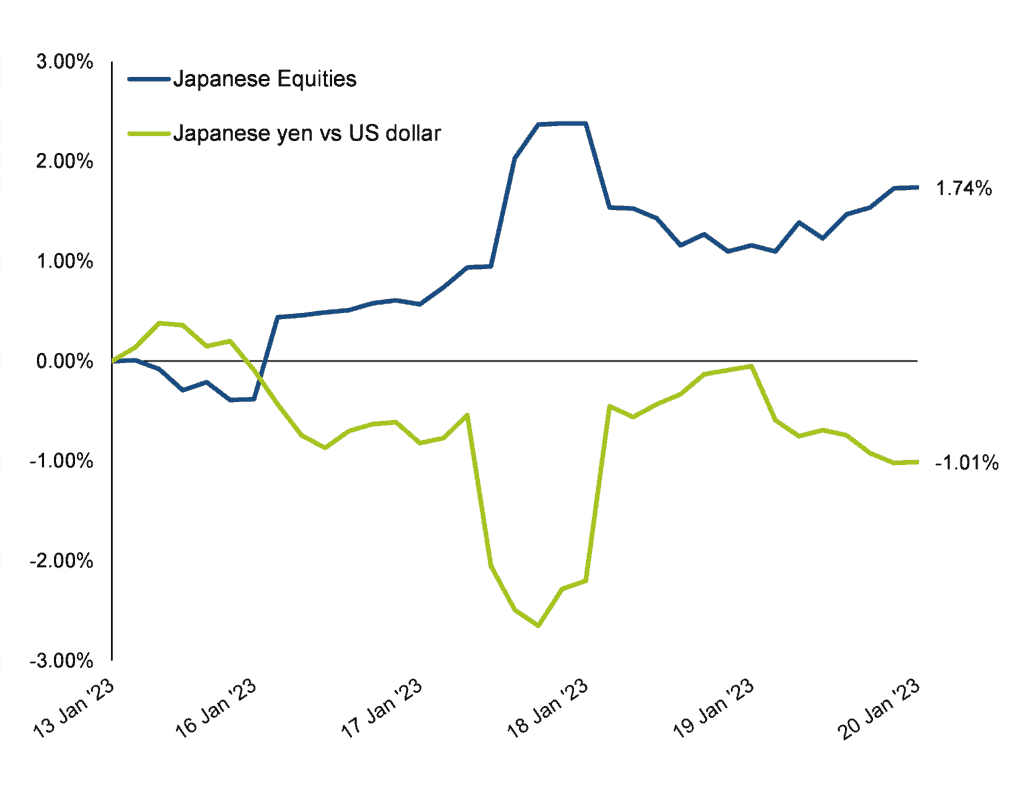 What is the Bank of Japan’s yield curve control?

Yield curve control was introduced in 2016 as part of a monetary easing programme, with the hope of waking up inflation and growth across Japan. Simply put, the BoJ adopted a policy rate of -0.10% and the 10-year government bond yield was fixed at 0% by buying enough bonds to push down yields in the hope to stoke inflation and growth. The central bank promised to maintain YCC for as long as necessary to achieve its 2% inflation target in the long run.

Why continue yield curve control if inflation is now at 4.0%?

Yes, inflation has risen above its target, but this is still very low compared to other developed countries. US inflation is currently sat at 6.5% and the Euro area at 9.2%. Most of Japan’s inflation is the result of high energy prices and a weak yen, which hit a 32 year low against the dollar recently. Hence, the Bank of Japan argues that inflation in the country is not yet sustainable. Not to mention the many years since 2015 when inflation has sat below their 2% target, potentially leaving headroom to ‘run hot’ for a while.

Impact on the yen and growth

A weak yen is an important aspect through which YCC can help stimulate higher Japanese growth. Because the BoJ keeps yields under control, rising yields outside of Japan cause the yen to depreciate, which stimulates Japanese net exports and pushes Japanese inflation up with higher import prices.

In the long term, it is not fully clear if the depreciation of the yen will be an overall positive for the economy. On the plus side, it would contribute to higher costs to the point where firms have no choice but to increase prices. This would increase inflation, exactly what YCC seeks. On the downside, the confidence of consumers and businesses faced with lower net income would reduce willingness to spend and encourage them to increase their savings, stifling growth.

Having to continuously buy enormous tranches of government bonds makes the YCC programme highly expensive. Bloomberg reports that the BoJ bought US$72bn of bonds on the 12th and 13th of January alone, and the central bank owns approximately half of the country’s bond market after a decade of purchases. The previous rate rise in December ’22 is now seen as an attempt to improve liquidity and reduce cost.

We have a taken a balanced approach to our active allocation to Japanese equities in portfolios. Whilst we are exposed to growth stocks, which endured a difficult 2022 as did growth markets globally, we tempered this exposure in September last year to introduce Japanese value into the sector, with our chosen fund up 4.5% since. If we do eventually see a move toward tighter monetary policy in the mid-term, this will have less of an impact on companies with lower valuations, something we saw in the UK market last year, which outperformed relative to many of its global peers. With any tighter policy will come the prospect of a stronger yen, which again plays into the hands of international investors, and we have therefore retained an unhedged allocation.

It will remain to be seen how ‘sticky’ inflation is in Japan. If inflationary pressures persist, it may be that we have seen the beginning of a tightening monetary cycle, but if we haven’t, and inflation remains manageable, the relative attractiveness of the market remains.