As we started the new Chinese year this week, the year of the tiger, we thought it topical to cover the main events and market drivers for China this year. Investing in China last year brought with it increased volatility, first due to restrictions set out by Chinese authorities in the technology and education sector, and then when Chinese property developer, Evergrande, missed various debt payment deadlines and cancelled a dividend, citing liquidity issues.

With the Winter Olympics (Beijing 2022) now under way, many will be hoping that the history of the Summer Olympics in 2008 and the Winter Olympics in 2014 doesn’t repeat itself. In each of these instances, Russia moved to invade Georgia and Crimea respectively and the world looks on in the hope that we do not see conflict break out on the boarders of Ukraine during this year’s sporting spectacle.

Although China have maintained a zero-Covid policy to run the event with limited restrictions, the Olympics themselves may sadly be left wanting for spectators, perhaps unsurprisingly, as China have not previously been a winter-sporting superpower, but also as the Chinese government had declared that no tickets would be sold for the games.

During the month of January, the rate on one-year loans in China was cut slightly to 2.85% and China’s central bank cut the reserve requirement ratio for small and medium enterprise lending programmes by 0.25%. At a time when other major central banks around the world have started to tighten monetary policy (raising interest rates and withdrawing stimulus), economists expect more easing measures in China over the coming year. China’s accommodative trajectory will be supportive of economic growth, which continues to be positive, but lower than historical standards.

Whilst President Xi Jinping and the Chinese Communist party’s reforms last year caused volatility and uncertainty, particularly in domestic markets, they form part of a long-term plan for economic growth and the positioning of China’s global influence. Despite Chinese assets declining through 2021, we are happy to retain our core position in the region as the steps the government is taking should be supportive to markets over the medium term. 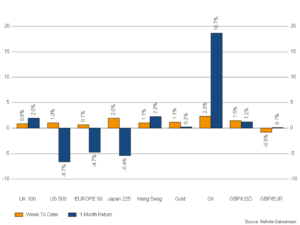