So far, 2022 has been the year to hold US dollar (USD) denominated assets. The dollar has appreciated against most global currencies, in many cases by double digits. With equity and fixed interest (bond) markets facing up to challenges posed by high inflation and tightening monetary policy, there have been few places to hide from drawdowns year to date. However, alongside commodities, the US dollar has risen this year as the currency of choice for global investors. So why has this occurred, and is there a way back for alternative currencies? 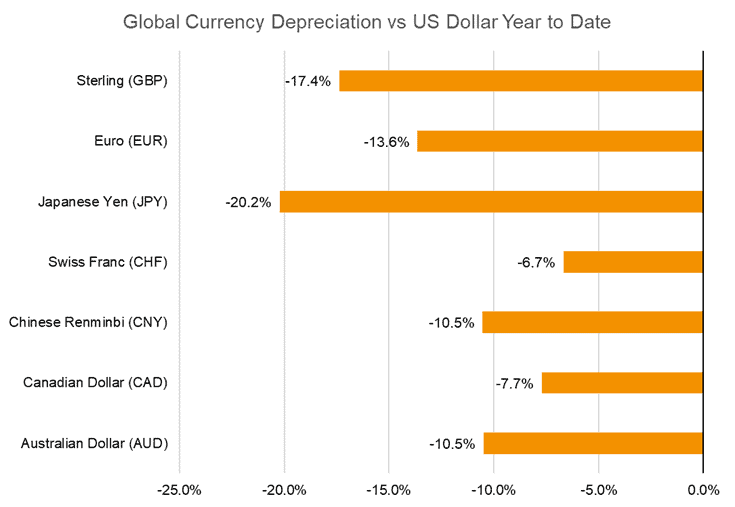 The US dollar index is now up more than 16% year to date, sitting at a 20-year high and the main reason for this is two-fold. Firstly, in times of geopolitical upheaval, such as we have seen this year with Russia’s invasion of Ukraine, companies, investors and even countries will often turn to the US dollar as a haven of strength, holding reserves in the greenback for security. Secondly, and perhaps more prominently, is the way that the Federal Reserve (the Fed) is leading the charge on trying to combat inflation.

Since the beginning of this year, the Fed has risen interest rates in the US five times, bringing them from 0.25% up to 3.25% in nine months. By comparison, the Bank of England (BoE) has raised rates seven times since December last year, bringing the headline rate from 0.10% up to 2.25%. Whilst hiking has been ongoing in the UK, and the BoE moved before the Fed, the pace has been slower, and this is the case across developed economies. The European Central Bank (ECB) left it until July to raise interest rates, the Bank of Japan (BoJ) continues to leave rates at all time lows and the People’s Bank of China remains accommodative. This has encouraged assets to flow towards the US and higher yields. The market has priced in the expectation of continued aggressive policy revisions from the Fed.

For sterling, the situation has recently been exacerbated by the policies implemented by new PM Liz Truss and chancellor Kwasi Kwarteng, which will see higher levels of debt for the UK and the potential for the stimulus to boost inflation further.

What does this mean for investors?

Domestic investors may see headlines reporting a falling pound and feel disheartened about their winter getaway exchange rates, but those with exposure to the US dollar will have benefitted this year. As the value of the dollar rises, so do assets denominated in the currency when priced back into sterling, giving a boost to performance during a difficult year for markets – no bad thing.

The question this raises is: if/when will the exchange rate move the other way, and what can we do about it?

If sterling were to strengthen against the US dollar, the impact on performance reverses and dollar-denominated asset prices would fall when priced back into sterling. However, if we were to hedge some of that exposure (remove the effect of currency on pricing) the strength of the dollar can be locked in. We do currently hold some hedged exposure through our global equity tracker, and we are considering the position of our other US funds.

When will the dollar weaken?

With the likes of sterling approaching parity with the US dollar and the Japanese Yen at levels not seen since the 90’s, it may seem an irreversible trend. However, as already stated, it is the macro-economic environment and monetary tightening that is driving much of this strength.

We may see some wind taken out of the US dollar’s sails as the BoE looks to be ramping up its approach to combatting inflation. In August the central bank raised interest rates by 0.5% for the first time since 1995, and again in September, while some commentators believe 0.75% rises are not far away. Whilst this is still lagging the pace of the Fed, it may help support sterling in the short term. In addition, although a recession is expected in the UK later this year, if data surprises to the upside and the economy remains more robust than expected, this will also help support the pound. Second quarter GDP growth in the UK came in well above estimates today, hitting 4.4% year-on-year, versus expectations of 2.9%.

Elsewhere, there are catalysts to encourage dollar weakness. When the BoJ amends its low-rate policy we will see a sharp rally for yen and weakness in the dollar. Indeed, when we see commodity prices start to normalise, with specific reference to natural gas, and the Ukraine conflict ease, the Euro will find more support. As global currency peers strengthen, we would expect the greenback to weaken across the board. This in turn would help support emerging market economies, which can find it harder when the dollar is strong.

Within portfolios we have plenty of options to hedge out currency risk without a need for wholesale change to asset allocation. The bulk of our direct US equity allocation can be hedged, and we are considering hedging some of this exposure over the coming weeks.