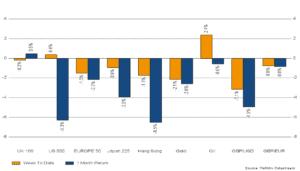 UK companies paid their shareholders a total of £14.2 billion during the first quarter of this year. This headline total was 24.9% lower than the first quarter of 2021. However, the total is misleading and requires some adjustments. For example, Tesco paid a very large one-off special dividend last year and BHP have departed from the London Stock Exchange and migrated to Australia.

After adjustments, the dividend pay-out was 4.2% higher last quarter than in Q1 2021. The biggest contribution to the increase came from the oil sector, which increased pay-outs by 29% year on year. It follows a rebound in oil and commodity prices which have boosted the energy groups, which are highly represented in the UK stock market.

Mid-sized companies continued to benefit from the post-Covid 19 environment, with dividends rising by 30.5% after many of these enterprises had seen more severe dividend cuts than the companies in the FTSE 100, hence their rebound was stronger.

An industry report estimates that UK companies will pay out approximately £92 billion to shareholders in 2022. The war in Ukraine is not only contributing towards the increase in energy prices, but also for metals pricing. Mining companies made no significant contribution in the first quarter to the overall dividend pay-out but should have a significant impact later in the year. If we exclude special dividends, total distributions for 2022 are expected to be around £85.5 billion; 11.5% higher than in 2021. Additionally, share buybacks are also increasing. According to AJ Bell, the scale of UK buybacks is on course to beat the previous annual record of £35 billion, set in 2018.

The UK stock market has a long tradition of paying higher dividend yields when compared to other developed markets, and as the below chart shows, the gap has been widening. 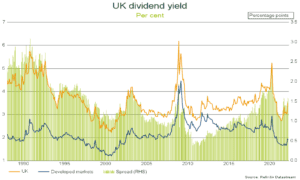 The last month has seen markets return to volatile ways as global equities have shed 6.3% since the end of March. Global stocks remain under pressure as the conflict in Ukraine wears on, inflationary concerns persist and Covid lockdowns in China pose questions for long term growth. Although we saw a modest rebound for risk assets in March, gains have been given back and more as investors grapple with these ongoing macro concerns.

High levels of inflation have a bearing on the valuations of growing businesses. Investors are weighing the impact of higher borrowing costs, and higher prices in general, on the earnings potential of businesses and how much of their pricing power can be retained. Russia’s war in Ukraine continues to disrupt food and components supply, having a negative impact on costs. This is particularly true for car makers that are currently slowing down their production across Europe.

Since last Friday, the US S&P 500 index has registered two of its three worst trading sessions this year as investors anticipated central banks in the UK and US would raise interest rates again to curb inflation. Federal Reserve chair, Jay Powell, has said a 0.5% interest rate rise was possibly on the cards in May.

Whilst it has been a challenging month, appetite for risk assets can turn quickly when positive progress is seen. Should a de-escalation in the Ukraine conflict or China lockdowns develop, or indeed inflation ease faster than expected, we would expect cautiousness to ease.