Over an eventful few months for British politics, the UK gilt market (government bonds) has been subject to a bout of enhanced volatility as looser fiscal policy in the form of stimulus and tax cuts initially set by Liz Truss, and her then chancellor Kwasi Kwarteng, has driven uncertainty. After the Bank of England (BoE) stepped in to shore up sentiment with an emergency bond buying programme, and Truss’ resignation paved the way for new PM Rishi Sunak to take the helm, things have calmed down, but for a time through late September and early October, gilts came under tremendous pressure.

Most developed economies around the world are seeing interest rates raised by central banks to combat high and persistent inflation. Traditionally, when central banks raise rates, bond prices fall and as a result yields rise. This is something we have seen across the board for major developed economies this year with US, UK and European government bond yields all rising.

Gilt yields had already risen considerably this year prior to September, with the 10-year gilt yield moving from 1.085 at the beginning of 2022 to 2.803 by the end of August. Many retail banks are estimating another 1.5% to 2% interest rate rise in the next four months from the BoE, and another 0.75% rise in the US. Yesterday, the European Central Bank announced a hike of 0.75%. 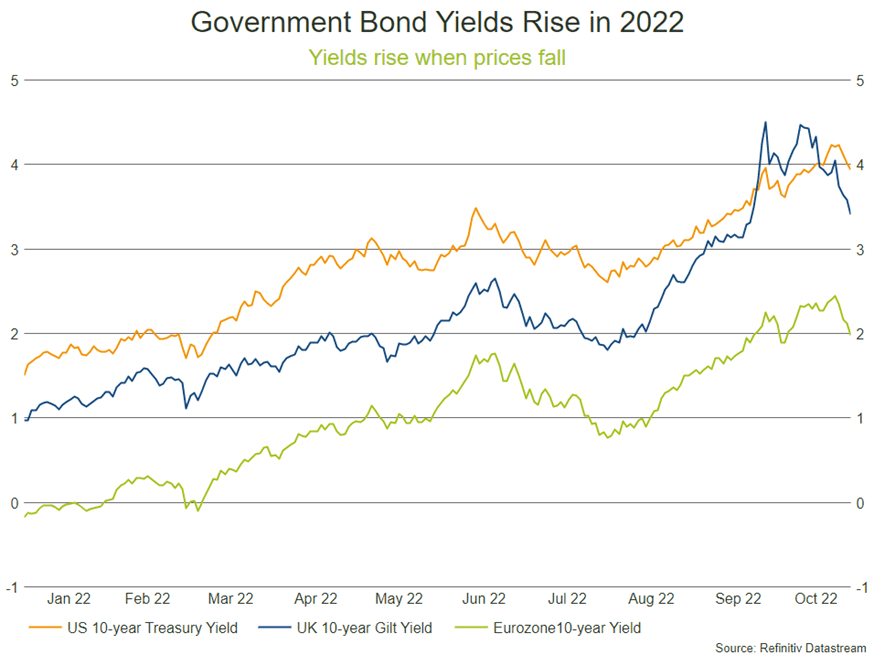 As mentioned above, UK gilts have recently suffered a more punishing sell-off compared to peers. It was Truss and Kwarteng’s mini budget, delivered in September, that was the main trigger for the surge in gilt yields and weakness in sterling. Further unrest ensued when pension funds were forced to liquidate positions to raise cash, which put more pressure on prices and forced the BoE to step in and address concerns by buying bonds to support values.

At the height of the volatility the five-year UK borrowing cost was higher than those of southern European countries (such as Italy and Greece). Some investors would have seen this as a near risk free investment, since the likelihood of the UK declaring bankruptcy is low.

Why does it matter?

Government bond yields feed into a number of decisions and measurements linked to financial markets and economies. Often, 10-year yields are used as a way of valuing companies’ future cash flows in today’s terms, and if rates are rising and staying higher, future revenues look less attractive. In addition, new bond issuance will need to carry higher yields to remain competitive in the market. This makes it more expensive to borrow money, which impacts the government, businesses and consumers. Even old/existing bonds that reach maturity may have to be refinanced, which will cost more to service because of higher yields.

Finally, mortgage rates have risen, having a direct impact on consumers. With the average new mortgage quote costing around 6% interest a year at the moment, this puts pressure on consumers, especially when 40% of mortgages need to be reviewed in 2023. In the US we have seen higher rates impact values, where house prices recorded a second consecutive month of decline in August. The housing market has slowed as mortgage rates are surging.

Despite these considerations above, with the unwinding of much of the mini budget, Truss and Kwarteng out and Sunak now ensconced in Downing Street, we have seen sterling recover from the lows of this year, back to 1.157 vs the US dollar and 10-year gilt yields have retreated back to 3.440, offering stability to the market. This reflects anticipation of a more balanced approach to fiscal policy, hopefully avoiding further inflationary pressure.

Despite initial and sensational market commentary, rising yields shouldn’t necessarily be seen as a negative. Although it is true that prices fall and areas of the economy suffer in the short term, we see this as an opportunity for fixed income assets. Short- and medium-term bond yields have significantly increased in the space of four months, bringing bonds to more attractive price points. Additionally, it now looks like inflation has started to flatten or even recede in the US, meaning the Fed may start to assess whether even higher interest rates are required. It is reassuring that amidst the volatility and political upheaval we have witnessed this year, we are starting to see more positive opportunities in asset classes that have offered little value over the last decade. 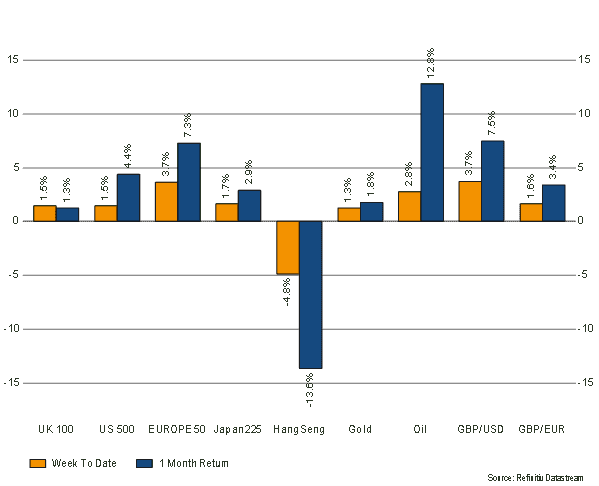