As the financial world has grappled with the prospect of a changing economic environment this year (with the well-publicised interest rate hikes and inflation story being front and centre), geo-political tensions have continued to rise as the situation on Ukraine’s borders has escalated.

Despite hopes this week of Russian troops being removed from positions close to Ukraine following training exercises, the US now believe up to 190,000 are stationed in Russia’s territories close to and around Ukraine, declaring it to be the most significant military mobilisation since the second world war.

Whilst predicting the outcome of this posturing is difficult, beyond hoping that all-out war is avoided, markets have provided the narrative for investor concern.

The most significant and obvious implication of these rising tensions has been on commodity prices.

Russia is one of the world’s leading suppliers of oil and natural gas, and accounts for approximately 11.3 billion barrels of oil production per day and around 24% of global natural gas supply. With geo-political unrest comes the threat of a disruption to supply. As a result, the prices of oil and natural gas are up 19.5% and 20.3% respectively this year. Portfolios have been a benefactor of this price volatility, with our holding in the derivative-based NN Commodities fund up 11.7% over the same period. 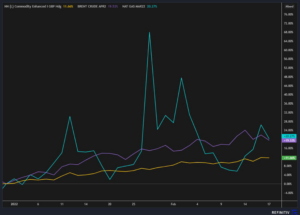 If there is an escalation in events or conflict breaks out it is possible that, amongst a raft of other economic and political sanctions, Nord Stream 2, a new Gazprom pipeline transporting natural gas from Russia to Germany, may be held out of commission in an attempt to dissuade Russian ambitions in Ukraine. In the wake of war and these types of sanctions, the already inflated natural gas price would likely move higher still and we would expect oil prices to follow suit.

With inflation having been pushed higher by tight global supply and rising demand over the last 12 months, the situation in Ukraine could help keep it higher for longer. However, common sense suggests that a peaceful compromise is in the rational interest of all sides and Putin continues to insist Russia is simply protecting its own interests, with no plans to invade.

We are closely monitoring the situation, have very limited exposure to Russian equities and we continue to position ourselves alongside experienced active managers as volatility is set to be high for 2022. 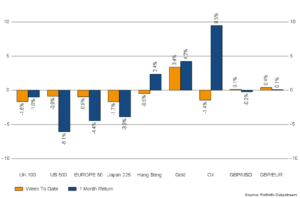