In our note last week, we discussed some of the challenges that Liz Truss will face as our new Prime Minister, and as part of a plan to address these challenges, the UK Chancellor Kwasi Kwarteng delivered an “emergency mini-budget” this morning. Within 30 announcements, the new government will attempt to boost Britain’s stalling economy and turn “the vicious cycle of stagnation into a virtuous cycle of growth”. Within this note we will address the main announcements made by the chancellor and their impacts.

Kwasi Kwarteng announced that the government will scrap the top tier 45% additional rate income tax and cut the basic rate by 1% next April. The decision to scrap the highest level of income tax, which affects around 600,000 people who earn over £150,000, is probably the boldest move from the government and will divide opinion.

In another controversial move the Chancellor confirmed that the bankers’ bonus cap, introduced in 2014 by EU legislation in the wake of the global financial crisis, is to be lifted, arguing the need to ensure the UK’s financial services sector, which makes up for a large portion of economic growth, remains competitive and attractive for talent and firms to carry out business in London, theoretically boosting the tax purse.

There will be a significant cut to the stamp duty payable on property purchases, effective immediately. The 2% rate has been scrapped permanently, moving the threshold at which stamp duty becomes payable up to £250,000. First time buyers have been specifically considered, with no stamp duty payable on the first £425,000 of a house purchase.

The UK government yields around £14 billion from stamp duty every year and the hope in giving some of this up is that it is spent by new homeowners on furnishings, white goods and renovation, moving cash through the economy and boosting growth.

As expected, the UK Chancellor announced that the planned increase in corporation tax from 19% to 25% next year has been cancelled. Additionally, the National Insurance rise will also be cancelled from November this year.

Mr Kwarteng also announced new “low-tax investment zones” that are aimed to attract businesses to locate themselves in 40 areas across the country through tax incentives. There will be no stamp duty to pay on newly occupied business premises implanting in these zones. Additionally, if a business hires a new employee within this tax zone, for the first £50,000 the employee earns, the employer will pay no national insurance.

The government laid out details regarding the announced Energy Price Guarantee. The scheme will cap the unit price that consumers pay for electricity and gas, limiting the average household bill to £2,500. They will also introduce an energy bills relief scheme for businesses, similar to households. Overall, the government’s energy package will cost £60 billion over the next six months.

Kwasi Kwarteng intends for the trend rate of growth in the UK to reach 2.5%, but also admitted this is not going to happen overnight. Yesterday, the Bank of England raised interest rates for the seventh consecutive time to 2.25%, an increase of 0.5%. This is the UK’s highest rate in 14 years. The central bank expects UK gross domestic product to contract by 0.1% in the third quarter of the year, marking a second consecutive negative quarter.

Economists see this budget as potentially working against what the Bank of England is trying to achieve: reducing inflation. Additionally, these measures are expected to increase government debt. As a result, sterling showed clear signs of nervousness amongst investors as it dropped against the US dollar during the budget this morning, hitting 1.106 at the time of writing.

Despite initial market reactions, Liz Truss’ tax cuts should benefit UK companies, which will incur a lower tax bill with the potential for increased consumer spending. However, there is no guarantee that these cuts will boost economic growth. A lower exchange rate means it is more expensive to import goods from abroad, a cost that will be passed on to the consumer and will feed into inflation, at least while the dust settles.

As mentioned last week, we hold a diverse allocation to UK equities, some of which we reduced earlier this year given the growth outlook. Whichever way the macro-economic factors move as a result of these policies, action to reduce the burden on UK firms will be welcomed by business, at least in the short term. It will remain to be seen how far these measures will go to boost growth and lighten recessionary prospects. 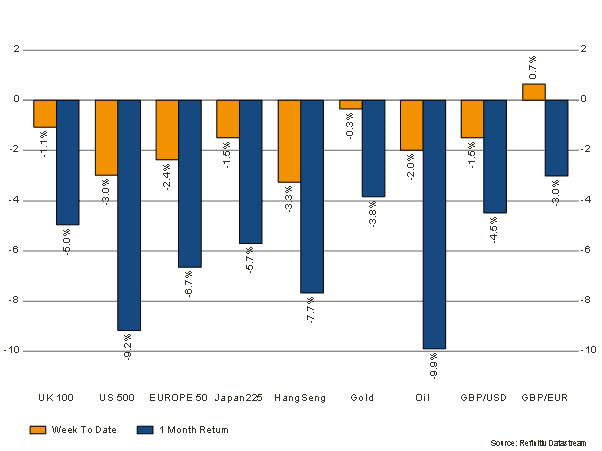