In the space of one week, an area in Brazil’s capital city, the Three Powers Plaza in Brasilia, has experienced two very different atmospheres. The name for the area is derived from the presence of the three separate governmental powers around a square: the Executive, represented by the presidential office; the Supreme Federal Court and the National congress. On January 1st this year, Luiz Inacio Lula da Silva took office for a third term as Brazil’s president, with a sea of supporters dressed in red. On January 8th, supporters of Jair Bolsonaro, the outgoing president, stormed the three buildings on the square to attempt a coup.

Last Sunday, thousands of Bolsonaristas stormed the square and invaded all three buildings, breaking windows and damaging furniture. The hordes refused the verdict of the ballot box, which voted Lula into office. Slightly worrying for a such young democracy, only created 38 years ago on the ruins of a military dictatorship. In events not dissimilar to those seen in early 2022 in the US, many have pointed towards links between Donald Trump’s most radical advisors and Jair Bolsonaro.

The responsibility of the former Brazilian president – who went to Florida right before the new year – is also in debate. Bolsonaro was not capable of acknowledging defeat against Lula and might have disqualified himself by his lack of response to the events in Brasilia on Sunday.

Lula da Silva took office for a third term as Brazil’s president, vowing to defend the poor, the environment and “rebuild the country” after the divisive administration of Bolsonaro. The large crowds for his nomination resembled that of 2003, his first inauguration. He previously left office in 2010, spent 19 months in jail for corruption charges (that were cancelled) and made a very impressive political comeback.

He now has many tasks ahead of him due to the economic and political upheaval caused by Bolsonaro’s administration. It is true that last minute stimulus carried out by Bolsonaro helped to boost growth in 2022, which is expected to be 2.9%, and inflation has fallen from 12% in April to 6% in November. However, not all metrics are as positive. The share of Brazilians who can’t eat has significantly increased from 6% to 15%. In 10 years, the government debt as a percentage of GDP has risen from 50% to 75%, and the annual deforestation of the Amazon moved from 6,000 sq km to nearly 12,000 sq km. Finally, the environment ministry’s budget is now a quarter of what it was when Lula left the office in 2010, when adjusted for inflation.

Lula plans to reduce illegal deforestation in the Amazon and reactivate the Amazon Fund. It will not be easy for him, and he will need to heavily negotiate his position. His party (the “PT”) only has 12% of seats in congress, meaning he will have to make deals with centre-right parties that wield masses of power.

Lula has a heavy economic agenda, wanting to launch new employment programmes, expand lending via the Brazilian Development Bank, encourage consumption and boost growth in the country. Although we think Lula is probably a better option for the country politically and socially, the financial markets are less forgiving. For example, the share price of Petrobras lost 6% the day after the inauguration because of Lula’s decision to continue fuel subsidies. On the same day, he decided to revoke studies to look into the privatisation of seven state companies.

We hold very limited exposure to Brazilian equities, and we are closely monitoring the economic situation in the country. We continue to position ourselves alongside experienced active managers as volatility in emerging markets remains high. 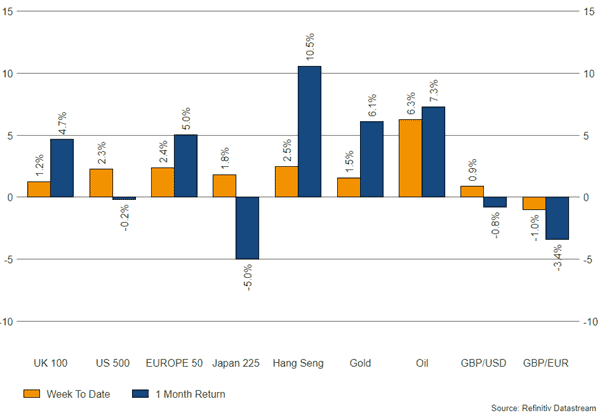