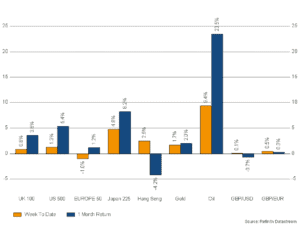 Higher energy prices, due to the events happening in eastern Europe, are placing a strain on consumers who have already faced significant inflationary pressures off the back of the Covid pandemic. 2021 had seen the price of natural gas push higher because of limited supply and, in the UK, low winds last summer. Although higher prices eased towards the end of last year, this second sharp rise has again put energy at the forefront of everyone’s mind.

The price squeeze has forced governments to analyse the source of their energy, levels of consumption and their ability to sustain these within an uncertain geopolitical landscape. A tighter energy market means those consuming need to get creative in how to meet the shortfall.

As the below graphic shows, the EU’s reliance on Russian energy has been huge and underlines their reluctance to sanction Russian imports heavily. This week we have seen a deal reached between the EU and the US to deliver liquefied natural gas (LNG) to Europe; a move away from Russian fuel that saw the oil price fall around 2%.

In the UK, there is a chance that the government will start re-issuing North Sea drilling licences and there have also been discussions about delaying the closure of coal power stations. Germany has even reactivated old coal power plants to ensure electricity supply.

Governments are also starting to directly support the consumer, with some choosing to offer subsidies. The French government has announced a 15 cent discount per litre of fuel, beginning in April for a period of four months, and also intervened with major energy provider EDF (Electricité de France), forcing them to supply power below market prices. In the UK, Rishi Sunak, the Chancellor, also announced on Wednesday, during his Spring Statement, a cut of 5 pence per litre on fuel until March next year.

What about renewable energy?

The road map for cleaner energy has become clearer over recent years, with the move towards environmentally friendly consumption the driving force behind corporate and political promises to support the renewable space. Indeed, we hold a direct allocation to the sector in portfolios to leverage this growing theme over the long term.

In the UK, Boris Johnson has committed to build a variety of new nuclear reactors and other renewable energy sources and the EU is committing €1 trillion to the clean energy initiative. In the US, Biden’s Build Back Better Act, which has passed the House of Representatives, but not the Senate, contains upward of $500 billion for clean energy tax credits, electric vehicles and more.

This can only mean one thing. A faster, better-supported push towards the renewable energy transition. The short-term pain of higher energy prices and public spending should accelerate the dawn of a greener future for us all and provide opportunities along the way.