On Sunday 10th of April, Emmanuel Macron (centre) and Marine Le Pen (far-right) qualified for the second and final run off for the French Presidential election, with 28% and 23% of the votes respectively. The ultra-leftist, Jean-Luc Mélenchon was in third place and was therefore eliminated in the first round. The showdown between both candidates will take place this Sunday. For the third time in 20 years, the far-right has made it to the second round and each time their share of the vote has risen. Nevertheless, we are still expecting a similar result as in the 2017 election, where Macron won 66% to 34%.

First round – a nightmare for the traditional parties

Although only two go forward, it was clear from the first round of voting that three parties emerged as front runners, taking around 73% of the total vote. The rest of them (of which there were nine) are far behind. This highlights the near disappearance of the two historical parties who’ve shared power in France for the past 40 years, the centre-right, Les Républicains, and the centre-left, Parti Socialiste. With each party securing just 4.8% and 1.9% of the vote respectively.

Les Républicains candidate, Valérie Pécresse, who at one stage appeared to have a slim chance of winning the election, had racked up personal debt to the tune of €5 million to cover campaigning costs. Because she failed to secure at least 5% of the vote, the state will not reimburse her campaign expenses, and she has been forced to turn to her members and voters to help cover the shortfall.

First round results and current polls suggest that Macron is likely to be re-elected on Sunday, although he does not hold the same lead as he did five years ago. On Wednesday, Macron and Le Pen argued for nearly three hours during a televised debate. Yesterday, a poll (post-debate) puts Macron ahead of Le Pen, by 56% to 44%. Macron seemed to have won the debate by exploiting Le Pen’s weakest point, her links to Putin and a loan to her party from a Russian bank in 2014 (helping to finance her 2017 presidential campaign). Macron added that when she talks to Russia, “she is talking to her bankers”. 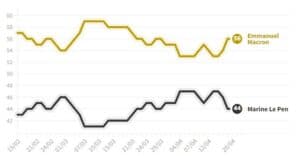 In March US inflation hit the 8.5% year-on-year mark, slightly higher than expectations. Interestingly, the month-on-month Consumer Price Index rose by 1.2%, the largest monthly gain since 2005. Markets seemed happy enough that inflation readings were broadly in-line with consensus, reflecting expectations that inflation pressures may be peaking.

UK inflation for March came in much higher at 7.0% year-on-year. Fuel prices were a key driver, as were food prices which rose 5.9%, which represents the highest rise in a decade. The Bank of England is under pressure to continue to hike rates, with the US signalling we could be in for a 0.50% increase in May.