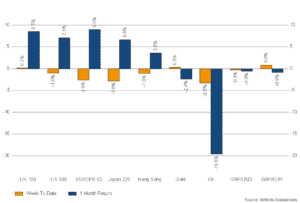 The US central bank, the Federal Reserve (Fed), last month gave investors what they have been waiting for: an insight into the balance sheet roll-off. The Fed’s balance sheet reflects the total value of assets purchased by them as they have bought up bonds in a bid to stimulate the US economy. Since the beginning of 2020, the Fed’s balance sheet has more than doubled in the wake of Covid, ballooning out to nearly $9 trillion. It now has a plan to shrink this figure in a bid to tackle the highest inflation seen in the US for decades.

What is the Fed’s goal?

To temper inflation, they have a number of tools at their disposal, including the ability to raise interest rates and remove financial stimulus from the economy. They implemented the first 0.25% interest rate increase in the US since 2018 during their committee meeting in March (though the minutes disclosed a number of Fed members wanted to hike by 0.50%).

Alongside this, details of the plan to reduce the Fed’s balance sheet were also shown in the minutes. By scaling back the injection of monetary stimulus pumped into the economy, they are tightening the economic environment further. The central bank’s plan is to shrink the balance sheet by $1 trillion a year, whilst hiking rates in an attempt to tackle high inflation. 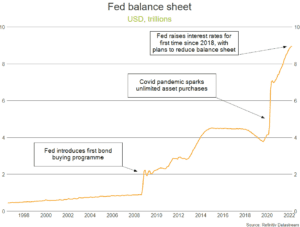 How will it work and what is the impact?

They will “roll off” around $95 billion of Treasuries (US government bonds) and other assets each month. What this means is that as the bonds they currently hold mature over time, they will not reinvest the proceeds of those back into the market, with the total value of assets held on the balance sheet therefore falling.

Expectations for the bond market are similar to those linked to rising interest rates – values will come under downward pressure. With a large buyer of bonds leaving the marketplace demand is dropping, driving the price of assets down and yields up. The 10-year US Treasury yield has reached 2.65% this week, a level not seen since early 2019.

Some fear the pace at which the Fed are planning to tighten policy this year may be too much too soon. By comparison, as a result of the 2008 financial crisis, the Fed slashed rates and began buying bonds for the first time in a bid to support the economy. After the dust had settled, monetary policy remained loose for years. Interest rate rises were not forthcoming until 2015 and a wind down of the balance sheet followed two years later. However, many feel their hand has been forced, with inflation running hot. According to Fed governor Lael Brainard, the economy can handle the faster pace “given that the recovery has been considerably stronger and faster”.

Although much is printed regarding the impact that tightening will have on markets and the economy, it is important to remember that it is a necessary part of the economic cycle. Tightening the belt when conditions are favourable means there is headroom to loosen the purse strings when they deteriorate. What remains to be seen is how the economic fundamentals change over the course of the year as the Fed pushes forward with its policy revisions.