According to ETF industry leader, BlackRock, investors have taken $1.5 billion out of bond ETFs (exchange traded funds) during the month of January for the first time in five years.

The wider US ETF and mutual fund market for bonds has seen decreasing positive fund flows (money going in) since September 2020, having recovered from net negative flows (money coming out) during the height of the Covid crisis in early 2020.

Prior to this we have seen net negative flows in late 2018 and briefly in early 2017. The former, during a time when interest rates had been rising steadily through the year and the latter, when Donald Trump had won the presidential election and markets expected rising inflation due to higher government spending and tax cuts. 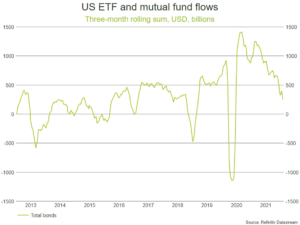 The downward trend of flows into bonds since February 2021 coincides with the rising inflation we have seen over the last 12 months.

US inflation has hit a 40-year high of 7.5% this January and the Federal Reserve (the Fed) is planning to begin raising interest rates in March, which has caused the 10-year US treasury bond yield to breach the 2% barrier for the first time since 2019. (When interest rates are rising, the value of bonds traditionally fall, pushing the yield on such investments higher.)

With the economic backdrop for the bond market looking less favourable, we have seen fixed interest investments fall in the last three months. Portfolios have not been immune to this, though we took action to sell our US treasury position in December last year, which has since fallen c.5%, reducing our overall exposure to bonds as a result. Looking forward, we expect the environment to continue to be challenging for bond investors, though some areas of the market will look more attractive on a relative basis. 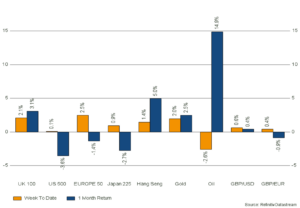