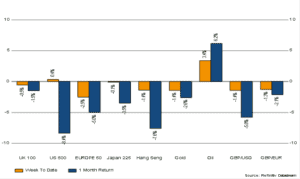 US markets have recorded their worst start to the year since 1939 with the S&P 500 falling by 13.3% as at the end of April. Investors looking for a bit of respite in early May will have been disappointed this week as all eyes turned to the US Federal Reserve (Fed) who were expected to announce their biggest rate hike in more than 20 years.

On Wednesday, this expectation was met as the Fed moved interest rates 0.5% higher, moving the US base rate to 1.0%. The hike itself was widely expected due to the current levels of inflation which hit 8.5% in March.

As a result US markets actually rallied off the back of the rate hike announcement, registering one of the strongest days since 2020, finishing the session between 3 – 4% up. Jay Powell confirmed that markets should expect rates to continue to rise by 0.5% in the next two meetings – this would take the US base rate to 2%. However, over the next 24 hours investors had more time to reflect and digest comments from the Fed’s Chair.

This dovish outlook caused Wednesday’s gains to be given back at the open on Thursday. The US Tech markets (Nasdaq) registered its biggest decline in one day, falling by 5%. The S&P 500 also declined by 3.5%. This movement reflected downgrades to global growth forecasts, especially the slowdown in China and the impacts of Russia’s invasion in Ukraine.

The Bank of England (BoE) followed suit on Thursday with the Monetary Policy Committee (MPC) voting to raise rates by a further 0.25% to 1%. The UK base rate is now at its highest level since 2009. In tightening monetary policy, the MPC is trying to tame inflation in the UK. The BoE announced they expect inflation to top 10% in Q4 of 2022 as rising energy prices continue to cause upward pressure on prices. They have warned this could push the UK into recession.

Whether or not markets will improve as we move towards the seconds half of the year is impossible to know, but investor sentiment has been improving and many believe the darkest moments are now behind us. Given the wider market backdrop (MSCI World Equites are down – 13.85% year to date), portfolios have held up well on a relative basis this year. Positive contributors include our commodity, healthcare, UK large cap and US value holdings.