Apple is officially the first PLC in history to reach a market valuation of $3 trillion. To put Apple’s size into perspective, Apple’s value is now larger than the combined value of all FTSE 100 companies. Astonishingly, over the past two years, the value of the FTSE 100 has remained fairly static, whilst the value of Apple has more than doubled: 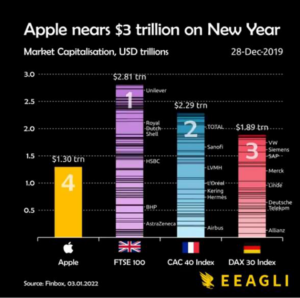 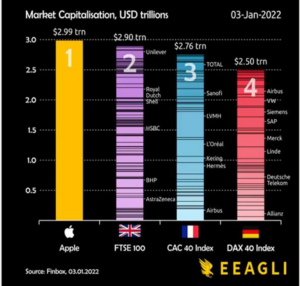 The rise in Apple’s market value is the result of the launch of the iPhone during the Steve Jobs era. After Steve Job’s death, many investors were sceptical that any successor could provide the same level of success in the years to come. Nevertheless, Tim Cook’s triumph as Job’s successor is now undeniable. Since Cook took over from Jobs in August 2011, the market value of Apple has grown by an unbelievable $700m a day until it eventually hit a $3tn valuation last week (source: FT). Steve may have been a visionary, but Tim seems to be an operational genius.

Tim Cook has built a company that squeezes every possible penny out of its customers. He has created countless flows of revenue from Apple Store fees and digital media that has developed during his tenure. He has also managed to reduce Apple’s reliance on the iPhone. Two major products have launched under Cook’s management, AirPods and the Apple Watch – have both been extremely successful, with market shares of 25% and 31% respectively.

Apple is a good example of a market leader with a strong business model and a company that is constantly innovating and looking toward the future. These high-quality growth companies should continue to grow and strengthen our portfolios.

On Wednesday, inflation data in the US showed that consumer prices rose by 7% year on year in December. Inflation in the US is now at its highest level since June 1982. This news had little impact for investors and traders who felt reassured by the Federal Reserve President’s statement made the previous day. Jay Powell told the US Senate Banking Committee that the Central Bank would tackle high inflation and forecast that the supply chain bottlenecks caused by the pandemic would ease during the year. 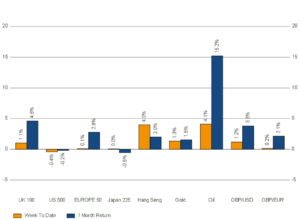